People looking to find employment and entrepreneurs alike are struggling due to crushing government environmental regulations and taxes.

In a piece for FEE back in October, I explained the rise in support for environmentalist parties.

Greens are present in 8 out of 16 German state governments, and they doubled their seats in the largest state—Bavaria—just over a week ago. On the same weekend, Greens in Luxembourg went from their previous 10 percent to 15 percent, prolonging their participation in government. In 2015 and 2016, Raimonds Vējonis (Latvia) and Alexander Van der Bellen (Austria) became Europe’s first two Green heads of state.

It turns out that this trend is continuing, as the Greens have increased their power in the European Parliament. Following the elections of May 23-26, the Greens jumped from 52 seats to 69. Most of this jump was due to increased voter support in countries such as Germany, France, or Finland.

Much of this is likely to be credited to young voters and the phenomenon of Greta Thunberg. The 16-year-old Swedish climate change activist has rallied masses of young demonstrators pushing their governments for “climate action” and popularized the question of carbon emissions more than ever.

Unfortunately, Europe has already been very tough on industrial production, with countries simultaneously attempting to get rid of fossil fuels while also phasing out nuclear energy. The result: rising energy prices for consumers, uncertain energy imports from countries that are less concerned with environmentalism (i.e. Russia), and inefficient renewable energy subsidies. That people looking to find employment and entrepreneurs alike are struggling due to crushing government environmental regulations and taxes is seemingly of little concern to the ideologues pushing for these changes and the media landscape accepting their narratives unquestioned.

As Germany’s Frankfurter Allgemeine Zeitung confirms, for young German families electricity has never been as expensive as it is today. The European Commission states that Germany had the highest household electricity prices in Europe in 2017.

But Germany is not the only country experiencing this. In fact, electricity prices for household consumers are increasing in all EU member states, as shown by Eurostat. 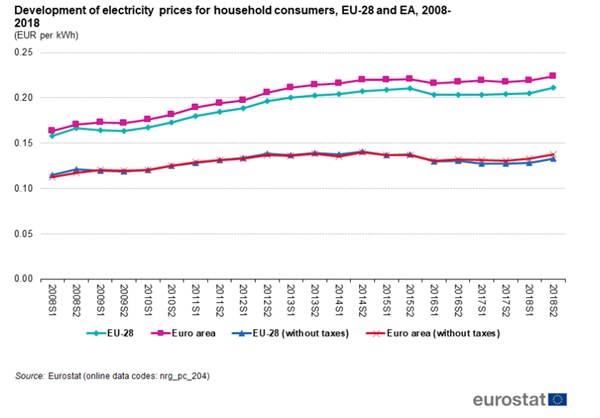 Two elements confirm the idea that environmentalists and aspiring lower-middle class citizens will find themselves in conflict: the Yellow Vests in France rebelling against a petrol tax coming out of the 2015 Paris Climate Accord compliance and the fact that this is a Western European phenomenon. The Greens are making waves in countries like Germany—and that success will give them legislative importance in the European Union—but this is not echoed throughout the rest of Europe. In Central and Eastern Europe, Green parties have not made any advances. Presumably, putting higher taxes on kerosene, petrol, flight tickets, plastic, gas, and electricity isn’t particularly exciting if your monthly wage is $500.

The big question is whether or not the Greens will become a part of the next coalition in the European Parliament. The center-right European People’s Party (EPP) and the Socialist Alliance (S&D) need a third partner to establish a European Commission (the executive in Brussels).

They are likely to opt for French president Emmanuel Macron’s Liberal Democrat alliance. However, center-right lead candidate Manfred Weber has hinted that the Greens could also be a part of this coalition. The Greens will be confronted with the choice of buying themselves political influence over losing their image of being the pure and flawless opposition.

What is certain is that the Green wave will influence the attitudes of other political parties. As national and regional elections are continuously taking place in Europe, all political parties know that their voters have this sensibility toward environmental policies and that they need to be catered to. This could result in even more environmental regulations as the European Parliament amends EU directives. In a similar way, the European Commission is also likely to make climate change a top priority for this legislature, which could make even higher carbon taxes a reality.

In Eli Roth’s horror movie Green Inferno, a group of idealistic rain forest activists falls victim to a cannibalistic tribe. What a metaphor for current environmental policies: In a day and age where humanity is in the midst of solving problems related to water supply, disease, nutrition, and communication, we’d rather eat our own than allow for more innovation. The charge is led by clueless activists incapable of identifying the disastrous consequences of their uninformed actions.

It is in the interest of social cohesion that this Green wave comes to an abrupt end. If not, we might soon see the conflicting interests of a struggling lower-middle-class clash with the feel-good policies of upper-class environmentalism. France has shown us what that looks like.

This article was first published by FEE.