This article was initially supposed to be titled “Becoming a Libertarian could be the most exciting thing you’ll do in 2016”, but ultimately seemed too long (and was less of a catchy title, or maybe that’s just me). This article will simultaneously be (as an edited version) a submission to the 2016 Essay Competition of the Web Of Life Foundation (W.O.L.F.). Participation is open until September 30th, guidelines can be found on their website.

Listen to the podcast

2016 had quite many things happening already, and with the presidential elections in the United States even more coming up. In between the political rhetoric and trench warfare we need to realise that there are higher ideals to be striving for. Between 2013 and 2014 I read The Law by Frédéric Bastiat – one of the greatest political and philosophical writers France has ever seen – and changed my view on the role of government and my perception of politics. [1]

“No society can exist unless the laws are respected to a certain degree. The safest way to make laws respected is to make them respectable.”

It is one of the valuable quotes from Bastiat. He wrote to a certain degree because he made the case that morality and the law often come into conflict, and that people have the miserable choice of choosing one of them.

Making laws respectable historically meant that those in power were to respect the freedom of their subjects to a degree that they did not endanger the ruling class with rebellious intentions. These tributes only respected the law if they considered it to be to their benefit. If their monarch assured their safety, organised a big celebration once in a while (like during the Roman times, panem et circenses) and left them enough food to make it through the winter, then being law-abiding did not seem be too big of a deal to them.

Globalisation and free enterprise have made our societies more developed and bring more and more people out of poverty. We have more means of communication than ever before : people talk about politics, they get involved in political parties and NGOs, and every political issue is constantly on the news. The trend of people getting involved in every part of politics is mostly because politics has gotten involved in every inch of our lives. There is virtually nothing that is not regulated or influenced by taxes or subsidies through government. Some might suggest that being active in politics is a hobby like music or sports, but unlike the latter, if you’re not interested in politics, politics is interested in you. Indeed politics is so interested in you that it’s all about participation nowadays : hundreds of councils and focus group try to connect people with politics, and politicians keep repeating almost robotically that it’s all about “making the right choices for YOU”.

Here is the bottom line : It is dishonest. But you can do something about it.

Now before the supporter of one political candidate or another screams up in intolerable anger for having his favourite candidate accused of lying, let us make it clear that that is not necessarily the suggestion. In fact there is a strong argument to be made that most politicians have perfectly good intentions, and even more so the party members, staffers, volunteers, all fighting for what they think is best. Ultimately we need to recognise that those who advocate the use of social services free of charge as much as those calling for the restriction of immigration both think that they are doing their fellow citizens a favour. What they do not realise is that their policies will benefit or unfairly disadvantage one or the other member of society. 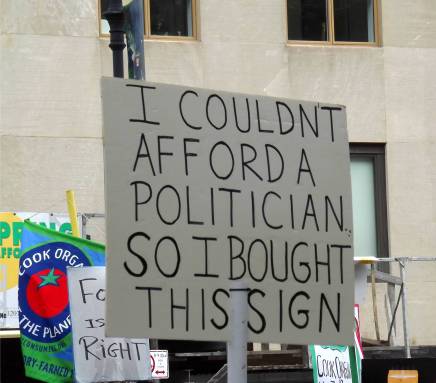 The issue is not that politicians are lying when they say their policies will benefit YOU, it is more so that they themselves believe it although it is virtually impossible. Life in society is too complicated and encompasses too many factors that a political bureau could lead it efficiently. There is no one being more apt to make choices about your life than yourself.

There is every difference in the world between connecting yourself with politics and connecting yourself with policy. The most frustrating thing for those who challenge the intrusiveness of government is people unwilling to think outside the box. They have accepted government being their nanny so much that they do not question that government controls this particular aspect of their life, but rather draw their attention ‘who’ and ‘how’. Thinking outside the box would mean that you are willing to accept that government does not need to meddle into your personal life to begin with, that you are the master of your own life, and that only you know best how go about it. We need to question those with authority not question those question authority.

What government needs to do to connect people with politics is to let them be free instead of drowning them in legislation. Freedom means discovering your own potential, it means being charitable with those who are less fortunate, it means finding virtue by letting others live their lives as they see fit.

[1] A full free version of The Law (in English) by Frédéric Bastiat can be found here.

Pictures are Creative Commons and are linked to their authors.

Thanks for liking and sharing !