Netzwerkdurchsetzungsgesetz. No, I didn’t just fall asleep on my keyboard. This is the actual name of Germany’s Facebook law which came into effect in autumn of 2017. This new legislation, officially known as “law for the improvement of law enforcement on social media”, is cracking down on “fake news” and abuse on platforms such as Facebook and Twitter. The unique and very disconcerting addition: the enforcement of the provision will be privatised.

The “NetzDG” demands that social media platforms remove false information or other content which is contrary to German law within 24 hours. As it recognises that the state does not have the necessary means to actually assure surveillance of the entire net, it relies on the platforms themselves to police speech, and, indirectly, the users. This means that German Twitter or Facebook users will be able to directly report infringements of the German criminal code and that the websites provide the means to do so.

Here is an example of how Twitter is implementing the said law: 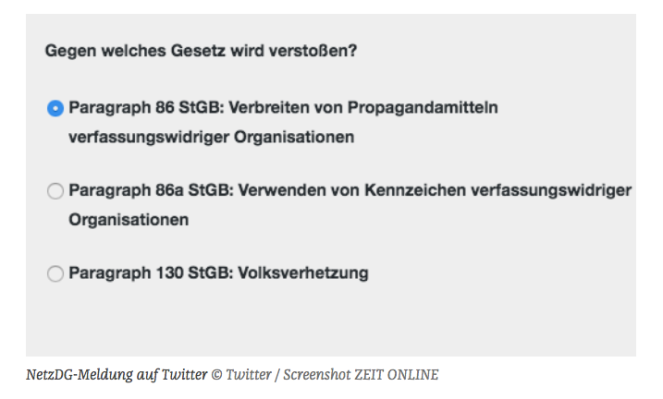 “What law is being infringed upon?

YouTube and Facebook have chosen the path of providing forms in which users specify the infringement that they believe they’ve witnessed. The have the obligation of deleting content which is “obviously” contrary to the law within 24 hours. Other content for which the necessary context needs to be analysed, the NetzDG provides an inquiry time of 7 days, during which the user in question will have the possibility of “Selbstzensur” (self-censoring). Let’s think about what this means: the state privatises the law enforcement regarding speech, providing an important incentive not to give content the benefit of the doubt, and it invites people to censor themselves, even though they might not have done anything wrong.

Ultimately, in order to avoid being fined by Berlin, social media platforms have every interest to remove any content that might be problematic. For instance, let’s say you write a tweet that claims the following: “I am for the reintroduction of the monarchy in Germany.” Given that monarchists are fairly rare in Germany and the statement is probably even more nostalgic than necessarily political, you’d think that this is the individual’s free speech. However, even though German law might not have a problem with the statement either, Twitter might easily consider that this statement could be considered as a call to undermine the constitution of the Federal Republic of Germany as a liberal democracy and remove the tweet.

In fact, nothing can hold users who simply disagree with the author of the tweet back, to report him regardless. The law provides no sanctions for individuals who wrongfully report content on social media, which makes it a legalised which hunt for the suppression of free speech online.

The mere fact that the companies that run the website are supposed to pick and choose what is and what isn’t offensive is deeply problematic. This makes some posts go against guidelines, while posts like this seem to be perfectly fine: 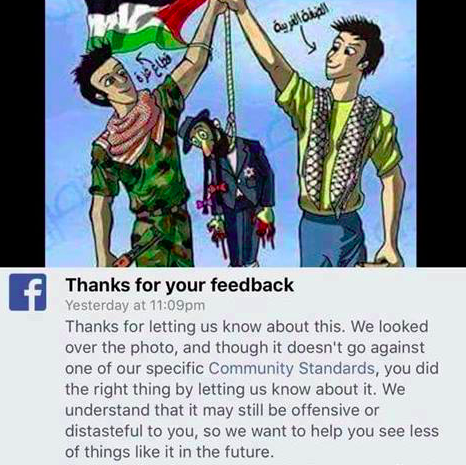 Criticism from all sides

Germany’s NetzDG has found a large number of critics, particularly from the side of journalists. You’d think that the media would be happy that finally politicians are cracking down on “fake news”, but  actually reporters understand that a measure aimed at obvious trolls can very quickly turn against them. Die Zeit writes:

“But in the worst case, what critics have feared could also occur: the half-baked and quickly lashed by the Bundestag “internet law,” would be exploited by trolls and propagandists to censor the opinion of dissidents – using social networks.”

“Rarely has there been a law for which we notice after just a week that it does not do what it ought to . Or rather: it does too much. Or even more precisely: it tempts networks to delete far too many posts , which may be hard to bear, but are covered by the principle of freedom of expression.”

As early as May last year, “Reporter Ohne Grenzen” (Reporters Without Borders) had slammed the measure as a danger to free speech and freedom of the press and a law that wasn’t sufficiently thought-out:

“For example, recruitment videos from the terrorist organization “Islamic State” may be objectively unlawful. But if journalists deal with it critically, it may be legitimate and desirable from a democratic perspective to show such material in part. However, content filters ensure that even such journalistic reports are automatically deleted because they contain material that was otherwise considered unlawful.”

Not to be misunderstood: social media platforms have the right to restrict content according to their community guidelines. However, the Netzwerkdurchsetzungsgesetz is a downright dystopian view of how speech should be policed: not through the free marketplace of idea, but through the hand of a state which arbitrarily censors and incentivises to censor. The NetzDG is a danger to free speech and freedom of the press.

It belongs in the dustbin of creative authoritarian lawmaking.

This article was first published on Values4Europe.